ALL0-9ABCDEFGHIJKLMNOPQRSTUVWXYZ
« Back to Glossary Index

Arthrospira Maxima is found in many freshwater environments, including ponds, lakes, and rivers. It thrives best under pesticide-free conditions with plenty of sunlight, moderate temperature levels and high pH, but it is also highly adaptable, surviving even in extreme conditions.

The Natural Origins of Arthrospira Maxima 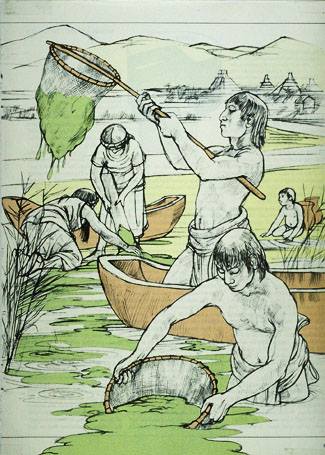 Arthrospira Maxima was rediscovered by the Conquistadores, an expedition led by Hernan Cortes, who conquered Mexico in the 16th century. Tecuitlatl, Spirulina’s original Aztec name, was a primary source of protein for the Aztecs for many centuries. It was made into cake-like bricks sold on the market of Tenochtitlan, where the lake was often covered with birds in search of this food. Today, lake Texcoco remains abundant in Arthrospira maxima. It is also widely available in Lake Chad and Hawaii.

Ironically and significantly, the most fertile valley of soda lakes with heavy Artrospira Maxima growth today lies in Africa. In East Africa, the Great Rift Valley begins in Ethiopia and runs vertically through desert wastelands for hundreds of miles linking Ethiopia, Kenya, Tanzania, and Botswana. This valley floor is lined with several large soda lakes. These lakes are large basins concentrating huge quantities of mineral salts leached from the volcanic soils by rainwater runoff over millennia. Along with the intense heat and sunlight of the area, these lakes provide the perfect growing conditions for Spirulina.