ALL0-9ABCDEFGHIJKLMNOPQRSTUVWXYZ
« Back to Glossary Index 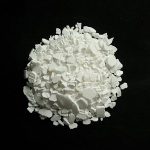 Calcium chloride is an ionic salt compound made of calcium and chlorine. Highly soluble in water, but remains solid at room temperature, and behaves as a typical ionic halide, Calcium Chloride is often used to melt heavy snow off paved roads, but can also be used for cooking.

in algae production, Calcium Chloride is used to control acidity and increase the water hardness, which reduces the erosion of the concrete in the pool. Increasing the concentration of calcium in the water will reduce the dissolution of calcium compounds essential to the structure of concrete, thus preventing leakage and preserving the pond’s lifespan.

Calcium chloride has several common applications such as brine for refrigeration plants, ice and dust control on roads, and in cement. It can be produced directly from limestone, but large amounts are also produced as a by-product of the Solvay process. Because of its hygroscopic nature, it must be kept in tightly-sealed containers.

Although it is generally recognized as safe (GRAS) by the FDA, its use in organic crop production is generally prohibited under the US National Organic Program.

Other Uses for Calcium Chloride

Medicinal applications of Calcium Chloride include replenishment of calcium levels, as an acid-producing diuretic, and as an antidote for magnesium poisoning.

In the food industry, Calcium Chloride is used as a firming agent, mainly for canned vegetables, soybean and tofu products. It is also used to flavor pickles, slow down the freezing of Caramel and correct mineral deficiencies in beer brewing and cheesemaking.  It is a permitted food additive in both the EU and USA, commonly identified as E509.

Hazards to Beware of

Calcium chloride can irritate moist skin by desiccating it. Solid calcium chloride dissolves exothermically and can cause burns in the mouth and throat. Ingestion of concentrated solutions or solid products may cause gastrointestinal irritation, ulceration, and hypercalcemia, which is a state indicating high calcium levels in the blood serum.

Where to Buy Calcium Chloride