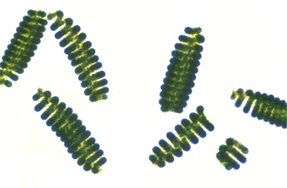 Arthrospira platensis is the scientific name for the commonly used blue-green microalgae Cyanobacteria strain used for mass cultivation of spirulina, historically mistaken for eukaryotes, a type of fungi. It is a non-toxic species of cyanobacteria with a wide array of medical, nutritional and commercial uses.

Arthrospira Platensis- An unusual strain in the Cyanobacteria Arena

The prefix Cyano in Cyanobacteria indicates the blue-green color of Arthrospira platensis, based on the wavelengths of light that it is able to absorb. While many bacteria are known for their pathogenic effects, A. platensis is primarily known across the world for its high nutritional value. It is one of the rare edible bacteria due to its low purine concentration, which allows it to pose very minimal risk of uric acid build up in the body.

Historically, it is known to have been regularly consumed by the Aztecs and tropical climate populations where it was often dried into flat patties for easy consumption. Because of its anti-carcinogen properties, it was also used to treat radiation sickness in people that were affected by the 1986 Chernobyl nuclear accident. More recently, the consumption of this species has been shown to lower blood pressure and reduce cholesterol, which are two of the most prevalent health concerns in the modern world.

The food industry classifies A. platensis as a single-celled protein, meaning that it is an edible microbe with a high nutritional value. It is rich in vitamins, minerals, beta-carotene, essential fatty acids, and antioxidants, all of which have facilitated its commercial production as a human food supplement over the course of the past decade. It also has very high protein content with a well-balanced composition of all essential amino acids, making it even more desirable as a food supplement.

Want to grow your own Arthrospira Platensis? Get your Starter culture on eBay!

A creative and entrepreneurial individual with a strong business background and a passion for algae, Natan has been researching Spirulina since 2005, striving to promote the growth of Spirulina around the world with minimum investment and maximum yields.
With a background of over 15 years in management, sales and marketing, Natan provide online consultancy services for spirulina growers seeking to expand their market share using digital media.

View all posts by Natan Gammer